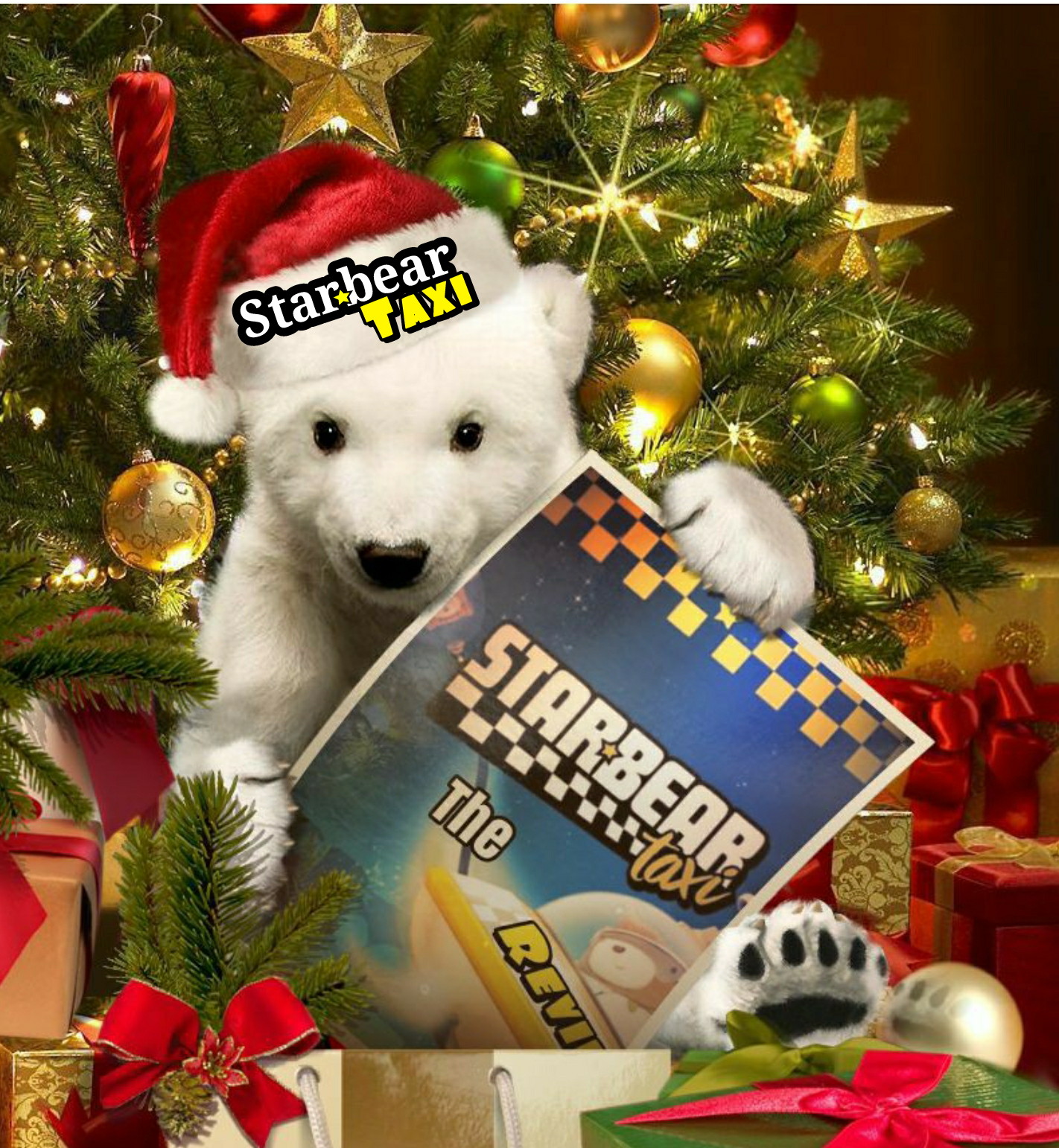 In the fast-paced city where I born and beared
Waiting for a taxi is how I spent most of my days
Waiting it out, trying to be all fly
While traffic was passing me by
When all of the sudden mean raccoons who wanted not to be good
Started causing trouble in the hood
I got attacked and the cry for a hero went out
That’s when the legend awoke
Fresh out of hibernation and went out and about

I hollered for that taxi and when it came near
The license plate said Star and it had a dome with no mirror
If any thought I had would be thanks for this bear
But I said: “Hey Starbear, get me to that building that is nearer!”

I pulled up to a diner about seven or eight
And I yelled at the cabbie “Yo Bear, I’ll tip ya later”
Looked at my destination, I was finally here
As the legend himself, Starbear was able to get me there

So does Developer Funktronic Labs able to get us here and there? Let’s find out with Starbear: Taxi for the PlayStation VR.

So what is the object of Starbear: Taxi? Well, the idea is simple. Get all the passengers you can to their destinations as quickly as possible within the time limit. I mean that sounds very simple. But, you see, this is the year 3064 A.D. and there aren’t really roads as there are flying vehicles. So you must use one Move controller to move our hero, Starbear, to and from and doing what he does best…getting the other bears to their destination.

I will say when you first look at Starbear: Taxi, you might think that you have this until you try and tilt your way into controlling your ship. It takes a few minutes to get the grasp, but it will take a little bit of time to get used to the movement. Think of it like trying to control an RC vehicle that flies. Sure there may be a little crashing into things, but that’s alright. Because you are Starbear…the hero…the legend. You have the power to satisfy all of your customers.

Well, except when you the more you start to deliver the passengers to their destinations, that the city starts to expand and what seemed like a simple concept turns into this craziness of fun of trying to not so much to get caught up in what’s going on around you as trying to remember the basic idea of delivery.

So Now with anything in life, practice makes perfect. So if you try and not to let the controls control you and find that balance it will all start to pay off. So in other words, don’t fight as you won’t need to tilt that much. In the beginning, I tilted too much and had my ship all over the place and even going behind me. That can get a little frustrating at times, but it’s not a deal-breaker. This is Virtual Reality after all and part of the immersion is the sound. So if you lose track of your ship, the sound will help and also there will be an arrow pointing you in the correct direction.

As you pick up your passengers and get them to their destinations, there will be golden rings that you will need to go through in order to get points, the area of the city will start to expand which means more passengers, but also enemies will try and stop you. This can be from mines that if you hit, time will be taken away to evil raccoons that like to shoot missiles that like to follow you that will also take away time away from your goal and even the trickier ones that can fly in their ship with a big magnet that wants to steal all your points. Those mean…mean evil raccoons. So as long as you can avoid all mines and raccoons, the city and its passengers will always look up to you.

Now like in life where people are not going to be the same, the residents of this fine city have different needs and want. With different types of passengers come different types of mechanics. For example, once a passenger starts swinging around while another seems to add some weight to your ship. So imagine flying around with some extra weight or something swinging and how that would control. So flying through the air with a swinging action trying to avoid the mines and missiles while trying to deliver the passenger adds to the hectic that can become as you race against the clock.

But as with the different enemies and passengers come different objects that will help you along with your away and hopefully if all goes as planned, will allow you to get even more points. From magnets that will allow you to pick up other passengers that you will need to get them through a black hole of sorts. Oh, be on the lookout for golden eggs that will make birds appear, that if touched will allow your score to increase. What I like is with everything thrown in and at you and all that you have to try to avoid, to throw in small birds into the mix really adds to the challenging aspect that I really appreciate.

Once the time has ended, you can restart to see if you can increase your score as well as your ability to control your ship, but you also have other choices with Challenge Mode and Bullet Heck. In challenge Mode the object is survival. You must survive because once you get it, the mode is over.

In Bullet Heck, it is you vs and evil Raccoon boss that wants to throw spiky balls your way while trying to collect a pot of honey that will be in the row of the spiky balls. But just like in Challenge Mode, once you get hit, this Bullet Heck mode is over.

The sound here is good. I love it when you have the sounds all around you. It really does add to the immersive experience of Virtual Reality and when you add a soundtrack that compliments the action, that is only a plus.

Graphically, the visuals are very colorful and easy on the eyes as well as it should be. As you get further along and the city starts to expand, the colors really do start to make the city come alive.

If there is one thing I wish that Starbear: Taxi had was leaderboards. There is mention that leaderboards were supposed to be included, but at this time of the review, they were not present. Maybe it will come with an update as I can just see who among your friends is the best or even the world.

Starbear: Taxi shows that anything can be possible and with enough practice, the sky is the limit. And sometimes that’s all we need in life is the practice to make our dreams come true.

Starbear: Taxi is out now on PlayStation VR and is also available on the Oculus Rift/S, Oculus Go, and Gear VR on the Oculus Store, Steam, Viveport, and Daydream on the Google Play Store. A review code was provided.

In case you missed the trailer, please enjoy. Until next time, I am going to go practice and top my highest score.

Tetris. The word alone has so many memories for so many players. Wither you played in the ’80s on a handheld or played one of the many variations over the years, it’s part of many of our lives. Even when I…
Read
Older Post

I love sci-fi. I love the way it takes you on the adventure. I love how sometimes you can just see the energy that went from the idea to the visual product kind of like how it is in Virtual…
Read
Random Post

What Will You Encounter By The Bonfire?

What if you somehow were placed in a room with just four walls with no signs of any doors, how would you feel? Would you scream, would you start placing the blame on others or would you try and escape…
Read
Random Post

Remember in season one of The Walking Dead where Rick starts noticing the walkers and searching for answers? Well take that and put it in Arizona through the desert and you will have Arizona Sunshine from Vertigo Games B.V. and Jaywalkers for…
Read
Random Post

Touring Karts Is Coming To PlayStation VR On...

You have the need, the need for speed. You know in your heart of hearts that you are the best both in non-VR and in Virtual Reality but feel the need to prove it. Now you have the opportunity to…
Read